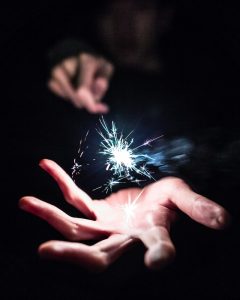 Moments where power is demanded or exerted are often essential defining moments in many works of literature. In addition, much of the conflict that occurs in literature stems from the desire for and abuse of power. Power is a concept interpreted in various ways in different literary works. It is a main theme seen in many of the books read in Introduction to Modern Multicultural Literature including A Raisin in the Sun and Mean. The concept of power is conveyed through words as well as actions in these works.

The word ‘power’ has a deep rooted history, but today is defined as possession of control, authority, or influence over others (Merriam Webster). The deep rooted history of the word, stems from its etymology. Originally derived from the vulgar Latin word- podir, meaning  “to be able to,” the word has a long history also rooted in the Anglo-French word “pouair,” referring to: legal power or authority; authorization; military force, an army, ability; ability to act or do; strength” (online etymology dictionary).

Lorraine Hansberry’s Play, A Raisin in the Sun, takes place in 1950’s Chicago telling the story of the Younger family: a family that frequently struggles with money and their relationships with each other throughout the play. The character Mama maintains most of the power over the household due to her generational authority. Hansberry displays Walters’ struggle for power through his words and his actions. Walter, son to Mama and brother to Beneatha, struggles throughout the text with his inability to work enough and pay for his dreams. After the death of her husband, Mama received a check for the insurance on his death. Walter states at the start of the text, “(Bitterly) [n]ow ain’t that fine! You just got your mother’s interest at heart, ain’t you, girl? You such a nice girl—but if Mama got that money she can always take a few thousand and help you through school too—can’t she?”(Hansberry 38). Mama intended on using it for a new home and to help Beneatha go to school to be a doctor. She did not endorse Walter’s desire to open a liquor store however, and Walter attempts to steal away the money Beneatha will gain by attempting to sway her away from going to school. Beneatha defends herself against his attempt to assert power over her, stating “[p]icking on me is not going to make her give it to you to invest in any liquor stores—(Underbreath, dropping into a chair)—and I for one say, God bless Mama for that”(Hansberry 39). Both Mama, and Beneatha have no interest in using money to open a liquor store. Walter continues to assert that Beneatha should not be favored with Mama’s money. He demeans Beneatha by claiming women do not become doctors and Mama should not waste money on a dream for his sister when he believes his dream is worth more. Walter uses his power of being the man in the family to attempt to overpower the dreams of his sister. We discover here that Walter does not care for his family’s dreams, but is willing to take the necessary funds from those dreams to build his own.

Mama fears she is losing her son after he starts staying out late and drinking all night.  She believes giving him responsibility over her money would teach him how to be the man of the house like his father once was and keep him from losing himself and drifting from his family. He however, uncaring of the risks he poses to the dreams of his family, uses this power and acts of attempting to obtain a liquor license. The attempt is a failure and Mama approaches her son saying, “Son, I gave you sixty-five hundred dollars. Is it gone? All of it? Beneatha’s money too?”(Hansberry 121-122). Walter’s struggle for power not only ends in disaster for him, but for his family as well. Although she does not back away from Walter and stand for herself, he ultimately gains control of the money, and abuses the power the money has and ruins the chances of his family in vain. Walter used his ability to act on his dreams, disregarding the potential loss his family will face because of it. It may be the case that Walter believed a man’s dream and power over the family money was more legitimate than his mother or sister in control over the family funds. In the end however, Walter shows that words and actions are able to be used in the attempt to overpower, or assert power onto others and how used improperly, power can corrupt dangerously.The text overall displays Walter’s constant desire for power, and although his intentions in the text are to provide for the family similar to how his father had, Walter fails to understand the danger this power struggle may have to his family. In the final scene, Mama allows Walter to make the decision over the house, shifting a large amount of the power to him. The result of Walter’s actions end with him leaving himself and family once again powerless because rather than being responsible with the money, he spends it all and ruins the hopes of himself and the family. Overall, Hansberry’s play is commenting on power dynamics by expressing that power must be earned.

Myriam Gurba’s memoir Mean conveys the concept of power throughout the novel by juxtaposing the powerful and the powerless in various contexts. The book entails the narrator, Myriam Gurba, living with her own PTSD from being sexually assaulted,  as well as being haunted by the death of Sophia Torres. Sophia Torres was raped and murdered by the same man that attacked Gurba. Sophia’s story haunts Gurba throughout the book because it could have easily been Gurba that did not survive. In describing these scenes of sexual assault, Gurba directly contrasts the powerful attacker versus the powerless victim through each individual’s actions in these situations. Victims of sexual assault often find themselves helpless with their fate left up to their attacker. The attacker feels powerful with this choice in their hands. For example, when Gurba is describing the rape and murder of Sophia Torres she states, “He presses his blade to her skin and slides it along her cheekbone. Black oozes from the slit. Wrecking her makes him feel like she belongs to him” (2).  Here Gurba’s shocking excerpt portrays a criminal’s idea of power. Gurba wants to highlight the man’s desire for power and his abuse of it over women sexually. Gurba describes the man’s intentions of treating her like an object that belongs to him. Feeling that “she belongs to him” shows the powerlessness that the victim feels, versus the desire for power seen through the actions of the attacker.

Towards the end of Mean, Gurba also conveys  power through her decision to graduate with a degree in history. History was the place where Gurba first experienced sexual assault when she was molested by McCauley. One might expect that she would hate history for the trauma that it McCauley inflicted on her during this class at a young age. Instead, Gurba states “yeah, history class was where I got molested. Nonetheless, I couldn’t stop taking history classes. I really like history (150).  Instead she took history back, claiming that instead of ruining her, “history made her cum laude” (157). She took a powerful stance and was able to move on and turn her traumatic experience into something positive. This depicts the concept of power by showing that Gurba has complete control over her own life.

Both these situations convey the idea of power in the sense of control. The example of Sophia Torres’ assault conveys the attacker’s desire for power that stems from his need to have complete control. His actions depict his abuse of power through treating Torres like an object that “belongs to him” (2). In addition, Gurba’s actions in taking back history represent the desire for power to take control of one’s own life.

The word power is a word that has multiple meanings in literature. Power can be defined in both Myriam Gurba’s Mean and Lorraine Hansberry’s A Raisin in the Sun,  as the desire for and abuse of control. In A Raisin in the Sun, Walter wants to control the family’s finances, and the lives of his family members in order to do so. His desires stem from the pressures of masculinity he feels in trying to fill his father’s shoes and be the man of the house. He tries to sway Beneatha away from her dreams and take that money to start his dream of opening a liquor store to support his family. He attempts to steal the money to take control of the family. Doing so would give him control over Beneatha as well as the rest of his family’s future. In Myriam Gurba’s Mean, both the desire for power as well as the abuse of it convey the definition of power. Through the shocking scenes of sexual assault, Gurba conveys the abuse of power by an attacker in a situation of rape. In addition, Gurba graduating with a degree of history conveys power. She takes action and takes control of her life. She turns a traumatic experience into something she aims to build a life around. Both books depict examples of the ways power can be used to build a stronger meaning of the story and help create a deeper understanding of an author’s purpose.

Hansberry, Lorraine A. A Raisin in the Sun: Lorraine Hansberry. GMC Distribution, 2007