Myriam Gurba’s Mean is most often described as a memoir and also a considered a ghost story. As you open up the book you’re automatically dragged into her world and her thoughts. She talks about her life growing up in California as a bilingual girl of Mexican and Polish descent. Gurba starts off the book by talking about the sexual assault of a woman named Sophie Loren in the section named “Wisdom”. Loren was raped and murdered on the baseball diamond in the area know as Oakley Park in Gurba’s town. When I first read these three pages about Sophie Loren it reminded me of one of my favorite tv series known as Law and Order: Special Victims Unit. The show is about detectives investigating crimes of sexual nature just like what happened to Sophie Loren. On the first page, Gurba wrote ” She reaches into her purse. Mexican hair falls across her face. It won’t look like that much longer. A man wearing white clothes creeps around the corner of the snack bar. He creeps up behind the girl and swings a pipe. It hits her in the head and her knees buckle”(1). The way Gruba describes what is taking place reminds me of how most of the episodes may start. Just a lady walking on a dark night then boom she is knocked unconscious and taken advantage of. I think by Gurba discussing the sexual assault of Sophie in the beginning influences readers to keep in mind that what happened to Sophie is also happening constantly around the world and not just in one place.

Gruba also continues to talk about sexual assault and molestation from her own perspective. We learn that in the section “Senorita” that she herself is molested in her seventh-grade history class by a boy named Macauly. We also learn that her being molested in her history classroom is not a one-time thing and that it happens constantly. Gruba stays quiet because she feels if she asks for help she will be portrayed as the “bad guy”(25). On page 27, Gruba is in relief that the class watched The Simpsons because she was free from being molested by Macauly. Even when her Dad asks her about her day at school she refuses to tell him what has been happening to her. Instead, she tells him that they just watched The Simpsons in class. Till this day there are women who do not speak up on when they have been sexually assaulted and refuse to get help. Most woman may feel as Gruba had felt as being worried about it being their fault.

As Gruba continued to deal with the unwanted attention she unhappily obtained from Macauly, She had thought if only her teacher would see what he was doing to her maybe he would help stop it. On page 31, Gruba discusses how her history teacher Mr. Hand had finally seen what was happening to her and did not say or do anything. She says ” I looked into Mr.Hand’s unprepared eyes. He looked me in mine. Mr. Hand’s face, neck, and, scalp went from light pinkish to cherry tomato”. This just shows that even though he saw what was happening to Gruba he could not believe what he was seeing. I feel like Mr.Hand was not really expecting to see what he saw and did not know how to react so he did nothing at all by avoiding the issue and acting as if nothing was happening. I feel as most people today if they would experience a moment like this would often say they would do something about it, But when the situation really happens they end up doing nothing at all. I would think someone would hope to not have to see this happening ever but it does happen in certain situations and it takes only one person to speak up and say something.

Mean is an outstanding book so far which has a tendency of catches the reader’s attention including mine like every book should. To read about her struggles and what she has gone through is tough, but she has a great sense of humor to push you along the way. Also, Her speaking about Sophie’s sexual assault and her molestation brings more awareness to sexual assaults that occur daily around the world.

Were there any sections of Mean that reminded you of something you have watched or seen?

If you were in Mr. Hand’s situation and saw what was happening to Gruba what would you do in that very moment?

My poem was inspired by an article recently on a Ferguson activist finding her son named Danye Jones murdered in the backyard of their home in St. Louis County in Missouri. I shockingly did not hear about this story on the news, I actually saw a tweet about the incident on Twitter. The tweet also revealed the horrific and devastating pictures of Jones that I’ve also decided to add in addition to my poem. The picture in the bottom right corner that I added is a picture of him hanging by a sheet around his neck on a tree with his pants down to his feet. Instead of having people who read my poem picture what he looked like at that moment, I thought why not actually show it.

As I began to figure out what words to use in my poem I found it very overwhelming. Even though my article was of fair enough length there were a bunch of words I would’ve liked to use but I could not use them all. I picked out the words that expressed the two point of views of what people believed happened to him and how others felt. I tried to be very creative while creating this poem because I want many people to be aware of most things that they do not inform us in the media. By placing his name several times scrabbled up I hope you would remember his name and not let what happened to him go unheard… 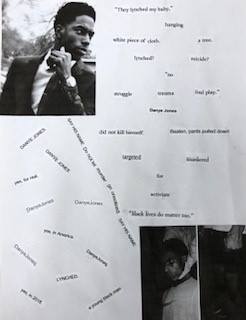 Most of my friends call me Boogie. I’m a Sophomore transfer majoring in Athletic Training. I’m from Nassau County in Long Island. I love Basketball, My favorite team is Golden State and Steph Curry is one of my favorite players. I’m also pretty funny if you decide to get to know me. Really looking forward to a fun semester!